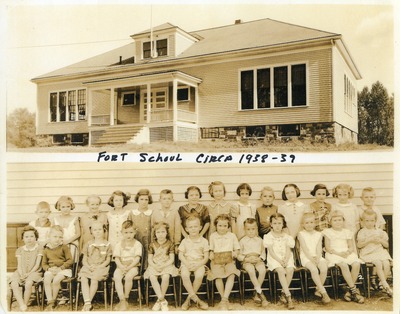 This is a copy of original photo of the second Fort School built on Lithgow Street in 1910. Though there have been additions to the building and changes in its uses, the original building is still standing on Lithgow Street. At one time it was the location of Waterville Window of which Lionel Gagne was a partner. It most recently housed a sort of food pantry - as of 2019, the building is vacant. This ceased to be a school around 1938-1939. The original Fort School was located across from the Congregational Church until it was lost in the Flood of 1987. It had been a museum administered by the Winslow Historical Society. First Fort School was build in 1819 and it closed as a school when the second Fort School was built in 1910. The Original Fort School was reopened in 1914 when the Winslow High School on Halifax Street (wooden building) was destroyed by fire in December, 1914.

Front; L-R; 6th student is Jack Jolicouer; 8th student is Norman Reny. They graduated in the Class of 1949, so photo is circa 1938-1939. There are several students in the picture who are from the graduating class of 1949, but their names are unknown.