Plan of the Northerly Part of Wiscasset 1808 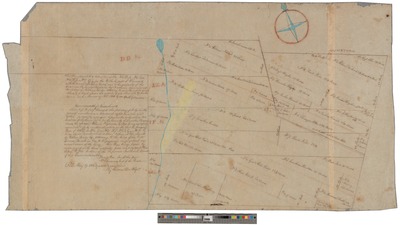 Commonwealth of Massachusetts. Lincoln fs., Town of Wiscasset, this first day of July in the year of our Lord one thousand eight hundred and twelve personally appeared before us the subscribers two Justices of the Peace in & for the County of Lincoln, Quorum Unus, the aforesaid William F. Gilmore & after being carefully examined & duly cautioned, made oath that the foregoing Plan of Lots D.d, No. 4, E.e. No. 5, F.f. No. 6 & G.g. No. 7 by him made & subscribed is, true, taken at the request of Nathan Bridge, Esq. Attorney to the heirs of the late James Bowdoin Esq, to be preserved in perpetual remembrance of the thing -- This Plan being copied by agreement with those interested from an original Plan taken by order of the Justices of the Supreme Judicial Court of this Commonwealth. Daniel Rose, Jus[tice] of the Quor[um], Wm Bowman, Just[ice] of the Peace. Rec'd May 19, 1813 & entered & examined by Warren Rice, Reg."