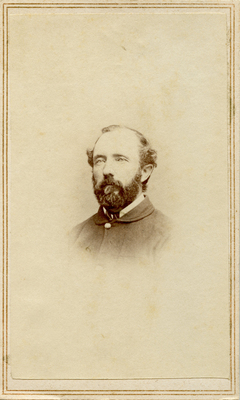 Isaac Crooker, Allen’s father, was a butcher in Portland, Maine. Isaac died on 3 Apr 1829. This left his mother Irena with the challenge of raising five boys. His mother, Irena (Coy) Crooker married second James Buck of Norway, Maine. Norway, Maine is where Allen spent the majority of his youth. Allen, like many others from Maine, moved to Massachusetts with members of his family to work in the factories. On the first call for volunteers on 16 Apr 1861, he enlisted in Company D, Fourth Massachusetts Infantry Regiment. He mustered out of this Regiment in the late summer or early fall of 1861 and went into Company G, Second Regiment, District of Columbia Infantry. Allen was appointed Corporal on 20 Nov 1863. He reenlisted on 29 Feb 1864. He was mustered out of service on 12 Sep 1865. After leaving the service he moved back to Paris, Maine and then back to Norway, Maine. He was a member of the Harry Rust G. A. R. Post of Norway.