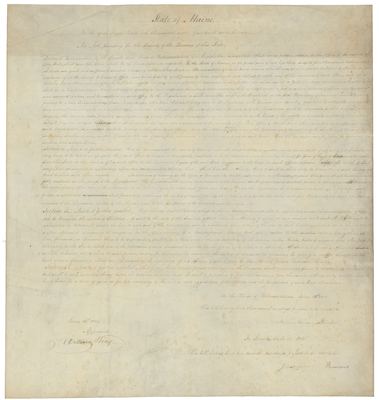 An Act providing for the Security of the Treasury of this State.

SECT. 1. BE it enacted by the Senate and House of Representatives in Legislature assembled, That every person, chosen to the office of Treasurer of this State, shall give the bond, which by the Constitution is required, to the State of Maine, in the penal sum of not less than seventy five thousand dollars, with at least six good and sufficient sureties residing within this State. The condition of which bond among other things, shall be for the faithful performance and discharge of all the duties of his said office, and for the fidelity of all persons by him employed and intrusted with any of the concerns of such office, and that during his continuance in office, he will not engage in any business of trade or commerce, or as a broker, nor as an agent or factor for any merchant or trader, and that he, or his executors, or administrators, or sureties, or their respective executors or administrators shall, and will render a just and true account of all his and his agents and servants doings and transactions in said office to the Legislature, or such committee as they shall appoint, on the first Wednesday of January annually, and previous to a new Treasurer's being chosen, and at any other time that shall be required by the Legislature, or the Governor and Council; and that he will settle and adjust said account, and faithfully and without delay deliver over to his successor in office, or such person OJ' persons as by the Legislature shall be appointed for that purpose, all and singular the monies, books, property and appurtenances of said office being and remaining in his hands, or in the hands of his agents or servants, and truly and without delay to pay over all such balances that shall appear due upon the adjustment of the accounts of his said office; which bone when executed and approved, as by said Constitution is provided, shall be lodged in the Secretary's office. And the Attorney General, upon order of the Governor and Council, or of the Senate and House of Representatives shall and may, in behalf and for the use of said State, commence any action or action on such bond and the same pursue to final judgment, execution and satisfaction.
SECT. 2. Be it further enacted, That the Governor, with the advice of Council, upon the complaint or suggestion, made under oath, of any surety of a Treasurer in any bond to be taken as aforesaid, that such officer is insane, or manifestly insolvent, or hath absconded and concealed himself for fear of his just creditors, or is absent from this State, or the duties of his said office, to the imminent hazard of the said State in respect to the trust in such officer reposed, and the truth of such complaint or suggestion appearing upon due examination thereof had, shall have the authority, and it shall be their duty, to discontinue such Treasurer and declare such office vacant. And in case of vacancy in the office of Treasurer by death, resignation or otherwise, or said Treasurer shall become, manifestly insolvent in the recess of the Legislature, the Governor, with advice and consent of the Council, shall appoint some suitable person a Commissioner to transact the duties of said office during the remainder of the political year, for which such officer was chosen, unless the Legislature shall be sooner in session. And before such person so appointed shall proceed to discharge the duties of said office, he shall take and subscribe the oaths and give bonds with the same conditions required of the Treasurer elected by the Legislature, to the acceptance of the Governor and Council.
SECT. 3. BE it further enacted, That whenever it shall become necessary that a Commissioner should be appointed under the second section of this act to transact the duties Treasurer, It shall be the duty of the Secretary of State and the Attorney General, or two discreet and impartial citizens to be appointed by warrant under the hand and seal of the Governor as soon as practicable, after either of the events shall happen mentioned in the second section aforesaid, rendering it necessary for the appointment of a Commissioner, having first given notice to the sureties, or any two of them, or the late Treasurer, or Treasurer thus to be superseded, shall take a true and accurate inventory of all monies, notes, bonds, books of account and other property belonging to the State, which was in the possession of such Treasurer, or in the hands of any of his agents or servant, wherever to be found; all which shall be delivered over by them to such person, as may be appointed to discharge the duties of Treasurer as aforesaid, he giving a receipt therefor on the back of said inventory, which shall be lodged in the Secretary's office: a copy of which may be given to any person interested therein.
SECT. 4. BE it further enacted, That if any Clerk, or other person employed by the Treasurer shall commit any fraud or embezzlement therein, and shall be duly convicted thereof before the Supreme Judicial Court, he shall be punished by fine not exceeding two thousand dollars, or by confinement to hard labor for a term of years, or for life, according to the nature and aggravation of the offence and the judgment of said Court thereupon.