Chart of the Coast of Maine No.4 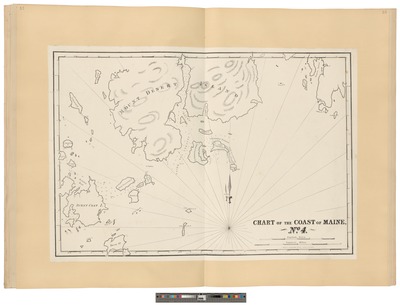 The map is fromA Survey of the State of Maine, in Reference to its Geographical Features, Statistics and Political Economy. This work is really a new edition of "A statistical view of the district of Maine ... by Moses Greenleaf," Boston, 1816. As that work was issued in connection with Greenleaf's first map of Maine, 1816, so the "Survey" was accompanied by the author's third map, "Map of the state of Maine with the province of New Brunswick by Moses Greenleaf," Portland, 1829. The atlas has no title page, but a label on cover reading: "Atlas accompanying Greenleaf's map and statistical survey of Maine ... Portland--Shirley & Hyde publishers." The maps are numbered, and their titles do not agree with those on the cover label. The first four are designed to set forth the American claims as to the disputed Northeastern boundary