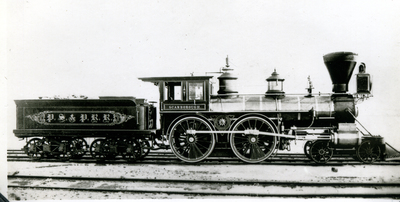 The PS&P was an early line according to Wikipedia that came into being in 1842. A year later it began operations with the Boston and Maine and the Eastern Railroad, & was bought by the Eastern RR in 1884. According to notes with this photograph 4-4-0 #21 carried the name "Scarborough". It was built in 1871 by the Portland Works. Note the very lite weight rail, probably 60lb iron. It looks like it was a wood burner. I suspect a 10 car train taxed the limits of this beast if there were any grades to contend with. /DL