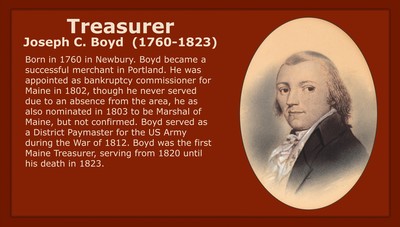 Born in 1760 in Newbury. Boyd became a successful merchant in Portland. He was appointed as bankruptcy commissioner for Maine in 1802, though he never served due to an absence from the area, he as also nominated in 1803 to be Marshal of Maine, but not confirmed. Boyd served as a District Paymaster for the US Army during the War of 1812. Boyd was the first Maine Treasurer, serving from 1820 until his death in 1823.